A (semi) light-hearted view from behind the teacher’s table!

These last few weeks before the Leaving Cert are anxious ones. Have I covered all the material? Will the poets I have focused on be there? What characters and themes are likely to come up in the Single Text question? How much more can I squeeze into these last few days? And then there are the nightmares – I covered the wrong text, I left out an important poet, nothing at all on the exam paper looks familiar… etc., etc., etc.

Indeed, readers, it’s a difficult time to be a teacher.

If you think that all the pressure is on the students, you’re quite wrong… Each student only has him or herself to worry about, but teachers may have the ambitions of twenty or thirty young people in their hands. Trying to strike the balance between narrowing down the course for last-minute revision and yet making sure your students don’t see this as carte-blanche to narrow it still further themselves; stretching your mind to its limits in a vain attempt to figure out every possible topic that could come up in the exam; trying to convince your students that is is not possible to figure out every topic that could come up in the exam and that, therefore, they may actually have to think for themselves – these are no easy challenges.

The students themselves tend to fall into one of three categories at this stage of the year. First, and easiest to deal with, are the hard workers; the diligent students who have worked solidly since the start of Fifth Year, who have listened to all your advice and have worked on their own initiative as well as doing what was prescribed for them. I think fondly and often quote the example of a girl I taught some years ago who would ask to borrow my notes at the weekend so she could do some extra work. (In school, as in life, people don’t always get what they deserve, but she did – an A1). These students need little more than some reassurance and final guidance at this stage.

Next, and not quite so easy to deal with, are those who are going to get what they’re going to get and they’re not going to stress themselves too much to get it. Some of these students can be very frustrating, as you know that in some cases they’re capable of much more, and it can be difficult to accept that that’s just not as important to them as it is to you. I seem to have completely wiped my professional memory of the reality of my own school days, when if it didn’t come easily to me, I wasn’t interested. I can never quite give up on the possibility of these students seeing the light before it’s too late, but it rarely happens.

The fact that the attendance of students in both the above categories tends to taper off in the last two weeks does nothing to help the stress levels of the poor teacher. Delivering your final insights, gleaned from many years of experience and copious amounts of blood, sweat and tears, just doesn’t give you the same satisfaction when there are only seven students out of a possible twenty-four sitting in front of you. (Hypothetical example… Wouldn’t happen in my school…) 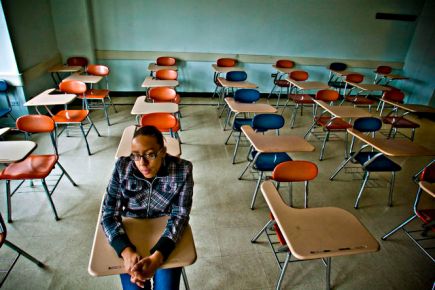 The final category, and the one which can really keep you awake at night, comprises those students who have only in recent weeks realised that yes, they need 500+ points in order to secure that college place, and that yes, that will require them to actually secure an A2 or a B1 in English. The enormity of the task ahead of these students, who often have ability but just haven’t worked for the past year and a half, cannot be underestimated. All of a sudden, they are stopping you in the corridor with random extra exam answers to be marked, or looking for the ten key quotes that can be used in any answer, or begging you to predict one poet that will DEFINITELY be on the exam… Their anxiety infects you and you rack your brains to try and think of any way to help them to ram two years of work into two weeks. Some of them will manage it, often with a little luck on the exam paper, but for more, it’s simply too late.

But every year, despite all my anxiety and theirs (or lack thereof), when the results come out, I find that students generally get what they have earned. And if I could give them one piece of advice, it would be that their lives don’t have to be determined by their Leaving Cert results. As Wilde so memorably put it,

Education is an admirable thing but it is well to remember from time to time that nothing that is worth knowing can be taught.