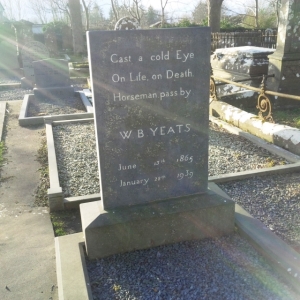 While I can’t profess to a comprehensive knowledge of the epitaphs of famous people, there are some very well-known ones which appeal to me, including Yeats‘ “Cast a cold eye on life, on death. Horseman, pass by.” This is, of course, an extract from his own poem, Under Ben Bulben, a practice mirrored recently by the family of Seamus Heaney, who have used the line “Walk on air against your better judgement”, from The Gravel Walks, as his epitaph (an announcement which inspired this train of thought!).

Epitaphs, if we choose them ourselves, (which would, admittedly, involve some slightly morbid forward planning) will be our final words to the world. The responsibility of that!!! Trying to sum up a personality, a lifetime and a worldview in a few succinct words or phrases is no easy task… But the alternative (apart from having none of course!) is possibly worse – someone else making that choice for us! There’s a classic episode in Bram Stoker’s Dracula where Mina and Lucy are treated to a lesson in the hypocrisy of tombstone inscriptions, some of which were obviously not chosen in advance by the deceased…

“Sacred to the memory of George Canon, who died, in the hope of a glorious resurrection, on July, 29, 1873, falling from the rocks at Kettleness. This tomb was erected by his sorrowing mother to her dearly beloved son. ‘He was the only son of his mother, and she was a widow.’ Really, Mr. Swales, I don’t see anything very funny in that!” She spoke her comment very gravely and somewhat severely.

“Ye don’t see aught funny! Ha! ha! But that’s because ye don’t gawm the sorrowin’ mother was a hell-cat that hated him because he was acrewk’d – a regular lamiter he was – an’ he hated her so that he committed suicide in order that she mightn’t get an insurance she put on his life. He blew nigh the top of his head off with an old musket that they had for scarin’ the crows with. ‘Twarn’t for crows then, for it brought the clegs and the dowps to him. That’s the way he fell off the rocks. And, as to hopes of a glorious resurrection, I’ve often heard him say masel’ that he hoped he’d go to hell, for his mother was so pious that she’d be sure to go to heaven, an’ he didn’t want to addle where she was. Now isn’t that stean at any rate” – he hammered it with his stick as he spoke – “a pack of lies? and won’t it make Gabriel keckle when Geordie comes pantin’ up the grees with the tombstean balanced on his hump, and asks it to be took as evidence!”

I’ve never felt the same about gravestone inscriptions since reading this!

Comedian Spike Milligan’s tombstone bears the wonderful epitaph, “Dúirt mé leat go raibh mé breoite”, translating from the Irish as “I told you I was sick.” This is a personal favourite of mine and I’m sure he’d have appreciated it if he had the opportunity to comment! Satirist Dorothy Parker, who was cremated, chose the unsurprisingly irreverent “Excuse my dust” for her memorial plaque, while Winston Churchill’s own humorously self-deprecating words were also used on his tombstone:

I am ready to meet my Maker.
Whether my Maker is prepared for the great ordeal of meeting me is another matter.

Less humorous but no less appropriate for its subject is the epitaph for civil rights leader Martin Luther King: “Free at last. Free at last. Thank God Almighty I am free at last.” Tragic poet John Keats, obviously underestimating the enduring power of his work, chose as his epitaph the words “Here lies one whose name was writ in water”, while William Shakespeare also supposedly wrote his own (not particularly inspiring) tombstone inscription:

Good Friend, for Jesus’ sake forbear
To dig the dust enclosed here:
Blessed be the man that spares these stones,
And curst be he that moves my bones.

So what to do? The words that go on our headstones may be read (and commented on!) for many hundreds of years, and while, admittedly, we won’t know anything about it, it’s still a chance to leave a final impression on the world. And yet… planning your own epitaph seems so… well frankly, morbid!

I’m open to suggestions… What would your epitaph be?