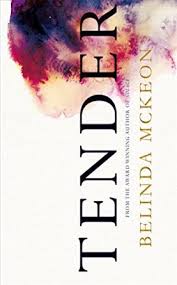 Last night, I binge-read Belinda McKeon’s Tender, and today I’m pondering my response. I had intended to use the book to keep me awake so that I could observe the Perseid meteor shower, which was apparently at its peak last night, but hazy cloud cover here meant that I saw nothing at all on my half-hourly checks outside. Eventually, I gave up on the meteors but by that stage, Tender had become unputdownable (yes, it IS a word) so I saw it through to the end only to find myself, in the middle of the night, finished the story but absolutely unable to say whether or not I liked it.

The opening of the novel didn’t engage me hugely, and James’ revelation was perhaps a little too heavily flagged, but there is no denying that the story become more compelling as it progressed. Catherine is an interesting protagonist as there is so much to dislike about her and yet the fact that she retains the sympathy of the reader is a testament to McKeon’s skill as a writer. While James and Catherine are very much the focus of the novel, other characters like Zoe, Emmet and Aidan also engage the reader and are far more than a two-dimensional support cast.

As the story darkens, I’m not certain that I find it convincing, particularly the unexpected turn in the relationship between Catherine and James (I don’t want to give too much away here in case you haven’t read it!!). Is this development realistic? Would James really have been so compliant with Catherine’s obsessive behaviour? I’m well aware that in many relationships, manipulation is disguised as love, and that abusive relationships can be so damaging to a person’s self-esteem that they will accept much more and for far longer than anyone, including themselves, would expect, but really, what’s in it for James here? Companionship – yes, intimacy – yes, ‘touch’ as Catherine says – yes, but still I’m not convinced. Maybe that’s just my own naivety.

The disturbing depiction of Catherine’s state of mind and thought processes during this obsessive phase is impressive and I was hugely interested in following it through to its climax. I loved McKeon’s narrative fusion of poetry and prose in this section of the novel, and as an admirer of Sylvia Plath’s poetry, the integration of Catherine’s work on Plath and Hughes really appealed to me. I do wonder, however, whether or not I would have reacted differently to this if I wasn’t familiar with Plath’s work and story.

400 words later, I’m no nearer to deciding whether or not I liked this novel. I liked elements of it very much and found others less convincing but I could probably say that about many books I’ve read.  It certainly left an impression, which is presumably one of the aims of a writer, and perhaps the ambiguity of my response is a measure of its quality.

If you’ve read Tender, what did you think?