Well maybe a little longer than 36 hours, but definitely not long enough! I arrived at Treviso airport on the Saturday evening and made the short transfer to Venice via bus, having purchased the bus ticket on board my Ryanair flight (€12 one way). As it was the end of October, it was dark when I arrived at the Piazzale Roma, and I would definitely recommend arriving in daylight if at all possible. Venice is different to anywhere else I’ve been, and it can be a little disorientating to make the switch from land-based to water-based travel in the dark! Or at least that’s my excuse for the fact that I spent twenty minutes waiting for at the tram stop before I realised that ‘shuttle’ in the directions I had received from my hotel actually meant WATER shuttle… That was my only hiccup, however, and having purchased a two-day ACTV travel pass for €30 at the ticket office in Piazzale Roma, I was free to take the vaporetto or water-bus throughout the city and out to the islands also.

I found my way to my hotel, the delightful Hotel Ca’ d’Oro, easily enough as it was only a five-minute walk from the vaporetto stop, and I would certainly stay here again if I’m lucky enough to return to Venice. The staff are friendly, and while my single room was tiny, it was beautifully furnished and had everything I needed for a comfortable stay. The staff were very friendly, and the breakfast was as you can expect to find in most Italian hotels – Irish people take note; it’s not called a continental breakfast for nothing, and you are unlikely to find a full fry-up or porridge on the menu! It’s within easy walking distance of the Rialto Bridge and St. Mark’s Square, and has a canal running right beside it so you can actually take a water-taxi right to the door if you wish. There is no bar or restaurant in the hotel.

I had heeded the many warnings to get to St. Mark’s Square early in the morning, so soon after 8am I set off walking from my hotel. The narrowness of the streets is one of the first things you notice in Venice – some are barely wide enough to allow two people to pass, and it can get very crowded in the middle of the day. There are signs on many streets signalling the general direction and pointing you towards the main attractions, eg ‘Per San Marco’ or ‘Per Rialto’, and a few minutes after leaving my hotel, I looked down a side-street to see the famous Rialto bridge right in front of me. When I arrived in San Marco, I was glad to have got there early as I had a great view of the impressive square with the famous basilica and campanile at one end. 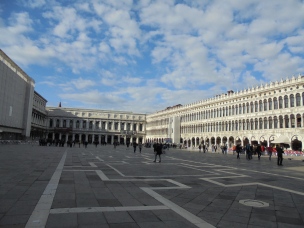 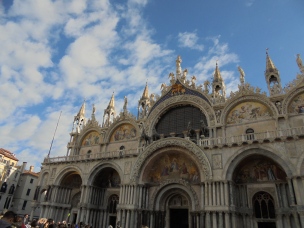 I discovered that the basilica doesn’t open till 2pm on a Sunday (9.45am every other day), so decided that I would return in the morning to explore. I wandered around enjoying the architecture before buying a ticket for the Palazzo Ducale or Doge’s Palace, which is a really impressive Gothic building and the spectacular interior is well-worth seeing. I also got the opportunity to cross the famous Bridge of Sighs leading from the palace to the prisons, and to see the view across to the island of San Giorgio Maggiore, which might have been the last sight those long-ago prisoners would have seen as they crossed the bridge. 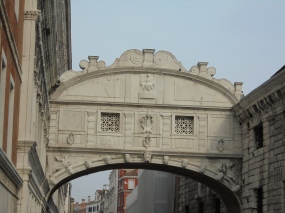 I had been advised that the views from the campanile on San Giorgio were better than those from St. Mark’s Square, and that the queue was generally shorter, and one stop on the vaporetto brought me to the island. Sure enough, there was no queue for the campanile, which is accessed through the beautiful church, and the views out over Venice and the lagoon were spectacular and really gave a sense of the magic of the place. I was starting to feel a little hungry now but decided to do the round trip on the vaporetto which took me up around the port area of Venice and back down the Grand Canal (about 45 minutes in total). 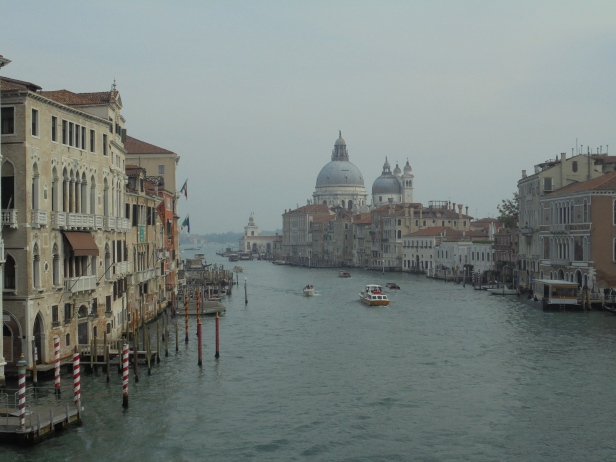 I disembarked at the Accademia and walked to the spectacular domed church of Santa Maria Della Salute. I had intended to visit the Peggy Guggenheim collection on the way, but there was a long queue so instead I took in one part of Damien Hirst’s Treasures from the Wreck of the Unbelievable at Punta della Dogana, right next to Santa Maria Della Salute. The exhibition has got mixed reviews, but I loved it! My time was limited so I didn’t linger, but walked back again and crossed the Accademia heading north. I tried to avoid ‘touristy’ food during my trip, and had a lunch of traditional black cuttlefish with polenta at the Ristorante da Maria Alla Fava, which was delicious.

The city was getting busy by this time, so I headed off on the vaporetto again, this time from Fondamenta Nove towards the islands in the lagoon. I skipped the popular Murano, where you can see the glass being made (next time!) and went on to the very picturesque Burano, where the houses provide a pop of colour and you can get an idea of what Venice must have been like before it became so commercialised. I had my first gelato here and it was well worth the trip! 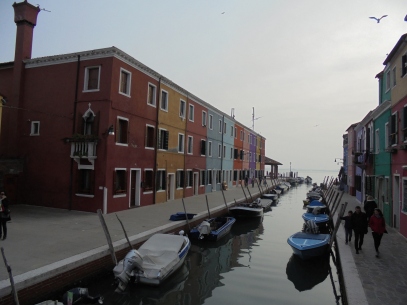 I had considered visiting Murano on the way back, but be warned – while Burano didn’t seem particularly crowded, I had a 45-minute wait to get on the waterbus as the queue was so long that two came and went before I finally got on!

It was around 5.30pm and dark by the time I got back to Venice, so I strolled around the streets for a little while before returning to my hotel and considering my options for dinner. I found a wonderful restaurant, just around the corner from my hotel, La Vecia Cavana, where a had a delicious (though not cheap!) meal of octopus, sole on the bone and a selection of desserts. I often find eating out the most daunting aspect of travelling alone, but there were other solo diners here and at no point did I feel uncomfortable.

After dinner, I decided to stroll over to St. Mark’s Square again to see what it was like at night, and this, I think, was the highlight of my trip. Two small orchestras ‘do battle’ outside the square’s famous cafés, and while it’s reportedly (I didn’t check) expensive to sit and order a coffee or a drink, you can stand in the square and listen for free. It was much quieter than earlier in the day, with a group of maybe sixty people moving back and forth between the two orchestras, who each played two numbers at a time before allowing the other a turn. It was a truly magical experience, going on till approximately 10.30pm. I then strolled back to my hotel still bathed in the happy glow!

The following morning, knowing that I would be leaving Venice at lunchtime, I returned to the basilica in St. Mark’s Square for a quick visit and then simply rambled the streets until it was time to leave. I moved away from the main tourists sights and wandered deeper into the quieter Cannaregio area of the city, and I was sorry I hadn’t done this earlier. Quirky shops, pretty bridges and the smell of roasting chestnuts provided a feast for the senses. All too soon, it was time to collect my luggage and whisper ‘Arrivederci’ to beautiful Venice. I’m already looking forward to my return!

Some things I  want to do on my next visit:

*For €5 per day, you can get WiFI hotspot access through the Venice Connected network – it’s not brilliant, but available in some of the main tourist areas. My hotel had free WiFi.