The Gaelic Players’ Association (GPA) has just launched an impressive new internal campaign, targeted at inter-county players, and reminding us all that  our GAA heroes  are normal individuals too, suffering under the same pressures and harbouring the same concerns as the rest of society.

This clever and thought-provoking campaign, showing players removing their county jerseys to reveal words like ‘Relationship’, ‘Doubts’ and ‘Family’ tattoed on their bodies, serves as a warning to us all in this world of celebrity-obsession, highlighted by the recent media fascination with the visit to Ireland of Kanye West and his new bride, Kim Kardashian.

You won't believe what #Kimye ate the first night of their honeymoon in Ireland http://t.co/AniTU79DOn

The difference here is, of course, that Kanye and Kim (particularly the latter) chose a life of celebrity, and the Kardashians are a prime example of that newer breed of celebrity ushered in by reality tv; those who are famous simply for being famous.

Our elite but amateur sportsmen and women are another matter entirely. They don’t seek the limelight or court publicity. They don’t earn massive sums of money in return for their public appearances. They simply play their sport, and are blessed (or cursed, depending on one’s perspective) to have reached the elite ranks by virtue of their natural talent coupled with hard work and determination.  As children, when we see our heroes on the field, a little seed is sown in every heart that grows into the idea that ‘that could be me’. I too could wear the red jersey of Cork or the maroon of Galway or the green and gold of Kerry. I want to play in Páirc Uí Chaoimh, or Croke Park, or whatever the field of dreams may be. I want to win All-Ireland medals. I want to lift the Sam Maguire. Few of us, however, think ‘I want to live my life in a constant glare of publicity with very little in return’ or ‘After a hard week at work, followed by a heart-breaking defeat in a tough game, I can’t wait to chat to reporters’ or ‘I look forward to seeing all my personal issues played out on social media’ 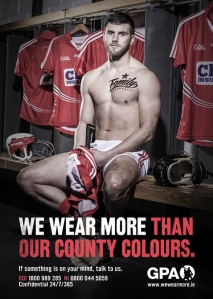 And yet as fans, we too are guilty of placing huge demands on the shoulders of our sporting heroes. We rail at missed frees or soft goals, or vilify a player who, normally outstanding, has one bad game. We, and particularly here in Cork, have often-impossibly high expectations, and woe betide those who don’t live up to them. We rarely if ever stop to think about what might be going on in players’ lives and in their heads. Just like the rest of us, GAA players have relationship issues, financial worries, fears for the future and many of the other insecurities that we all face in our daily lives. And yet we expect them, having worked or studied all week, to go out and perform to the highest standard in every game, regardless of any other issues.

Many inter-county players have achieved success beyond their wildest dreams, and have been lucky enough to be part of consistently high-achieving teams. Many have gone on to develop very successful professional careers on the back of their sporting experiences. However, as Conor Cusack, Alan O’Mara and others have so eloquently reminded us, depression and other mental health problems are no respecters of either success or failure, and can strike in the midst of both. 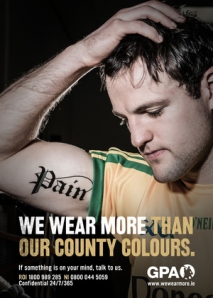 While the “We Wear More than our County Colours” campaign may be an internal one with the aim of reminding players that the GPA is always there to listen and that ‘it’s ok not to feel ok’, it should also serve to remind us as fans to respect the many, often conflicting, demands placed on our amateur sports players. Performing at the highest level involves many sacrifices and while we might envy these young men and women their success, few of us envy or even consider the downsides of that success. We too need to be reminded that our players wear more than their county colours, and ARE far more than what we see on the pitch for an hour on a Sunday.

For more on the We Wear More campaign, see http://www.wewearmore.ie/

2 thoughts on “More Than Their County Colours”